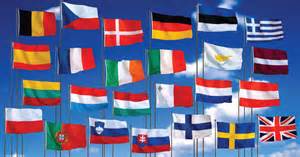 As a Northern European, (if there is such a thing) who has lived in various countries in the EU, it was around my time in Brussels I had regularly got caught up in conversations about Europe. I recall a moment having watched Andy Murray win Wimbledon on a screen at a tennis club, the Belgians around me were commentating. ‘Les Anglais sera très fière. C’est très bien pour les Anglais.’ I had to correct them in that Andy Murray was Scottish and not English. This is a common error made by the Europeans, i.e. misinterpreting the English with the entire island. I had to explain that in the UK, we have the Union of three nations (and Northern Ireland), and to help us identify with the Union we are known as British. They knew this of course. They pressed on by asking why the Scots were wanting independence when we have the European Union?  Or worse still, how come the UK is arguing for a referendum in Europe whilst the Scottish might be seeking independence from the UK? I asked them that how was it that Flemish political forces were seeking the break-up of Belgium whilst they too were in Union with Europe. Nothing really made a lot of sense.

Naturally these are big questions which are fundamental as it raises so many other issues. They are fundamental because it has everything to do with our beliefs, values, purpose, history, culture, and tradition. In a word, our identity which is about who we are and why we are here which President Hollande of France once argued we seemed to have lost. There is clearly an air of unease in and around our formidable continent. As this Belgian continued to speak, he blamed everything on our liberal and tolerant attitudes (liberalism) as well as individualism. In other words so many of us seems to have a difference of opinion with differing self-interests succumbing to what we want or desire resulting in far too many pointless laws instead of concentrating on what we actually need. This arguably numbs our identity, core values, conviction and beliefs. In addition by making ourselves hostage to the consumer system, this could result in the perfect storm.

How does one turn the tide of liberalism and individualism in differing representative democracies? Somehow we need a new way forward with a new sense of freedom. The solution that this person and I agreed with was that we were Europeans in that we needed a strong identity in Europe which implies we have to change our attitudes. This requires a need for strong leadership and a very strong representative power structure in Europe one in which has a coherent sense of direction to keep everyone together by respecting each other’s nationhood and traditions. Not have everyone going in every different direction linked to a total misconception of individual freedom. With no higher authority this will have a tendency to result in a breakdown in conduct, general standards as well as a general decline in our services as we are seeing daily everywhere. Moreover we cannot just plodder along by simply having a bit of everything in order to satisfy a bit of everything. At some point hard choices and big decisions would need to be made. Perhaps Europe is now ready for a federal system in what the founding fathers, Monnet, Schumann and even Churchill argued for but this time with a different vision fitting to the times of today. The UK with their hands tied will have no choice but to stay in in order to preserve their very own Union. Or with their potential turn of events would we prefer Scotland in and England out?

Similarly in business, with globalisation, businesses went on the global rampage seeking new markets. Some went ahead of themselves where often personal ambition got the better by exploiting resources from other territories and using employment as their just cause whilst others realised that due to the crisis this may not have been the solution and humbled themselves by re-localising again. Often businesses are in direct conflict to how political forces operate which may explain why they hire so many lobbyists. It also depends where the power is. Is it in those that lead large businesses including our banks or is it in those that govern? Or is there simply a struggle between the two, leading to the two coercing with each other impeding our grasp of our very own destiny adding to our inability to advance forward? The solution in business could be that, once Europe has its power structure right and regained its coherent sense of purpose; business can reflect let alone respect that power structure so they too can get it right.

Reverting to our cultural identity, I don’t know about you but if I was to travel abroad outside of Europe, and I meet a German or a Swede, apart from my limited linguistic skills, I can totally identify with them far more than with the local country I am visiting. I may be referred to as some quintessential Englishman, and yet I am also a European. We just poke fun at each other and our differences but somehow we are of the same stock. As for our economy, the Brits can invent, the Italians can design, the Germans can engineer and so can the French. The Dutch can trade, the Spanish can help renew everything and the Scandinavians can make things useful.  As for the Greeks, they founded Western civilization they can help us rebuild it again. We really can stick together and become a winning force to reckon with if we try and help each other with our core expertise in our advance forward. In all this a common denominator will need to be found to help keep us together and by this it would require something more than just the Euro.  It would be sad if we were to breakup, God only knows what would happen.

Come on Europe! Let’s get the right people in at the top and show the rest of the world what inner steel we are made of. Yes, Mr. Lakshmir Mittal, that very steel that you have helped us to lose which almost defined us so many years ago.

Only with identity, involvement is functonal
Posted by George Sanne at 13:27